Where Did Key Lime Pie Originate? 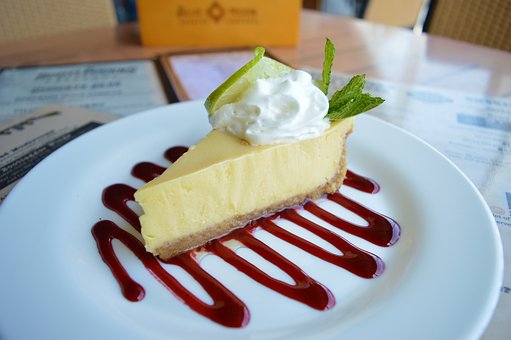 Key West Florida is famous for two things: the Ernest Hemingway house (with its 6 toed cats) and Key lime pie, named after limes which grow in the Florida keys. A favorite American dessert made with Key lime juice, sweetened condensed milk and egg yolks, the traditional”Conch version” uses the egg whites to make a meringue topping. Key limes are smaller, more tart and aromatic than the common limes we buy yearlong in grocery shops and grown abundantly in other areas of Florida and California. Key lime juice, unlike regular lime juice, is pale yellow, which, together with the egg yolk, produces the filling’s pale shade.

Appearing in the early 20th century the specific origins are unknown, but the first recorded mention of Key lime pie may have been produced by William Curry, a boat salvager and Key West’s first millionaire. Supposedly his cook,”Aunt Sally”, made the dish to get him. It seems his crews of sponge fishermen at sea didn’t have access to ovens but the first version allowed the creamy pie to be ready without baking. Early writings state that Aunt Sally’s variation called for a graham cracker crust and softly whipped cream.

Many cooks and bakers in Florida assert their recipe is the sole authentic version. Everyone does agree, however, that green food coloring is for amateurs, and a proper version should be pale yellow. Key limes (also called Mexican or West Indian limes) are the most common lime found throughout the world; the U.S. is the exclusion in preferring the larger Persian lime.

Both controversial versions center around crust and topping. Early pies probably did not even have a crust, but sailors vacillate between traditional pie crust and graham cracker. And then there is the topping. The two camps argue meringue vs. whipped cream. (Apparently these folks have a whole lot of time on their hands.) Contrary to popular belief, what makes the filling creamy isn’t cream whatsoever but sweetened condensed milk that’s thicker than evaporated milk and comes in a can, initially introduced by the Borden Dairy company in the late 1800s. It is possible that when the sponge divers had anything to do with the pie, they indeed had lots of canned eggs, milk and Key limes on board (and a good deal of sponges for cleanup ).

Although grown for centuries in Asian and South America, they didn’t make an appearance in the U.S. before the late 1800s. Which means foodie president Thomas Jefferson missed out entirely. (How he would have loved those pies!)

If you go to Key West, pie factories and bakeries abound, and you can literally eat your way from one end to the other, reveling in the different offerings and deciding for yourself which you like best. Additionally, there are stores which sell dozens of products improved with Key lime, such as moisturizers, potpourri, candles, soaps, candies and biscuits. Unfortunately for much of America, procuring authentic important limes is not always easy, and using regular limes just won’t do. Oh sure, you can purchase bottled juice which the locals would frown on, but for some it is much better than nothing.

Starting in 2013, the yearly Key Lime Festival is held over the July 4th weekend for a celebration of their favourite citrus not only as pie but in different foods, drinks, and an important portion of their. Clearly these aficionados take their pie very seriously and expect no less from anyone else. And by the way, don’t even think about using frozen topping. The whipped cream authorities will find you and have you arrested.